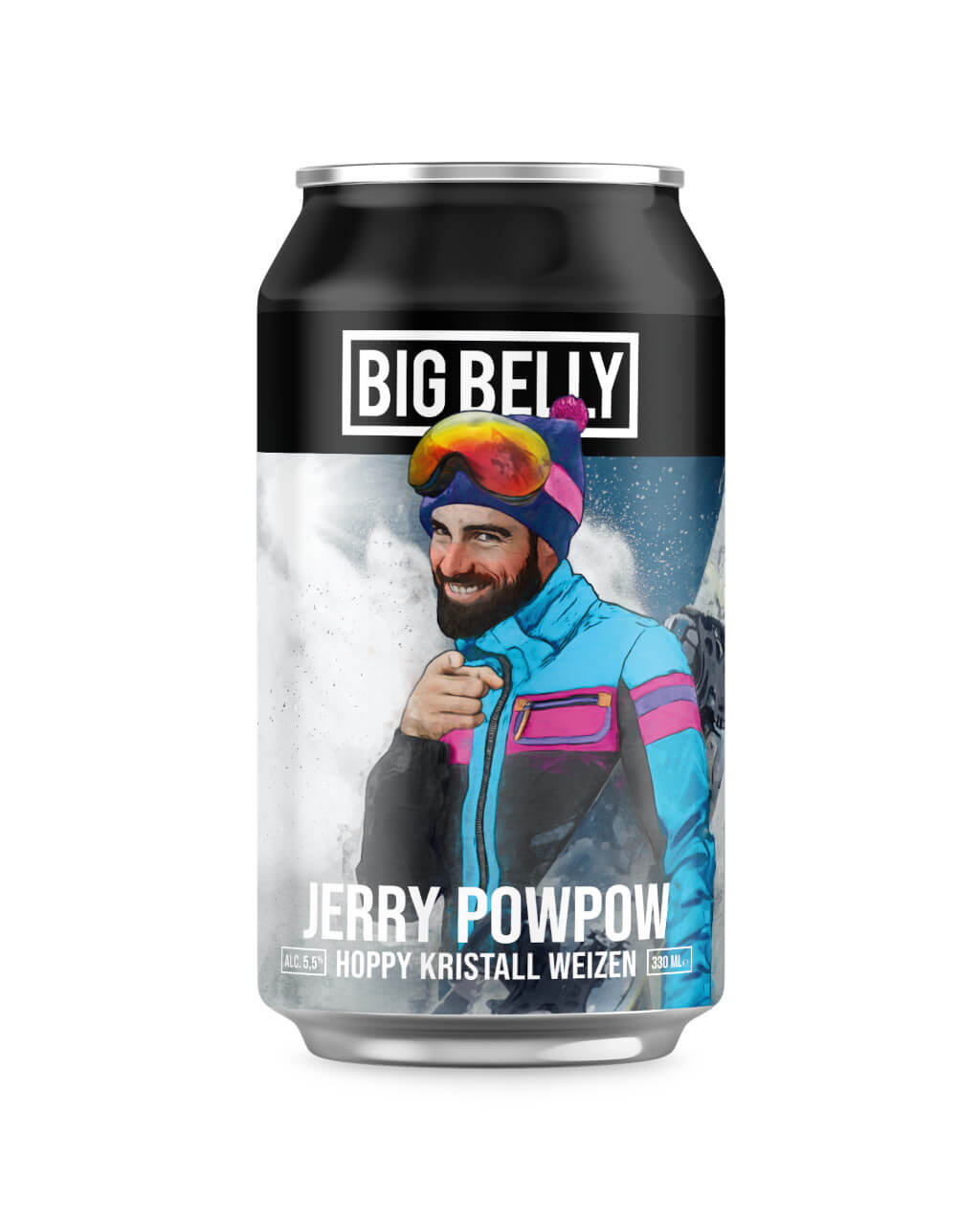 The story of Jerry PowPow the shredder

YIIIIHOOOO. One night, at a local schirmbar, Jerry tripped an bumped into this mega foxy German board chick. She confessed she had been watching him for a while, and said his disco pogo dance moves were ganz geil. After the shared ten schnapps an beers, she invited him to board to a place were they could be alone… Moments later, she unclipped her bindings, took off all het clothes and stood there, but naked… “”Nimm mich wie du willst.” Ah yeah. Jerry can’t wait to shred some Pow-Pow on his new board.

Jerry PowPow is a lot more drinkable than your normal Weissbier. “Kristall” is German for “yeah we filter beer hard”, making this Weizen a lot more crispy and crushable. We hopped it with Amarillo, for some nice orange and citrus aroma’s 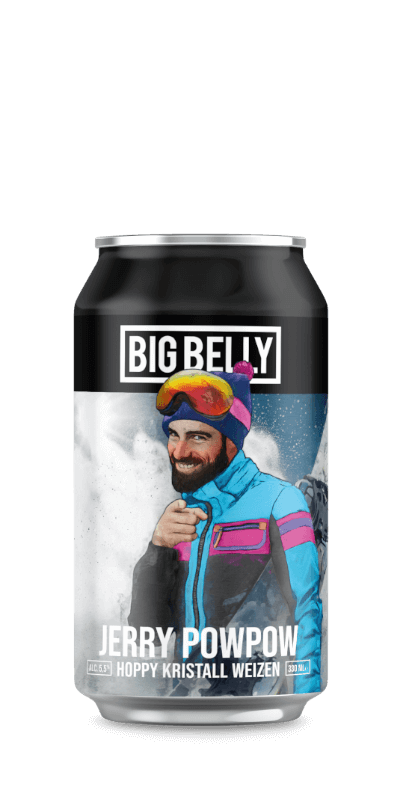 €29,00
Jerry PowPow
Jerry PowPow is a lot more drinkable than your normal Weissbier. “Kristall” is German for “yeah we filter beer hard”, making this Weizen a lot more crispy and crushable. We hopped it with Amarillo, for some nice orange and citrus aroma’s. 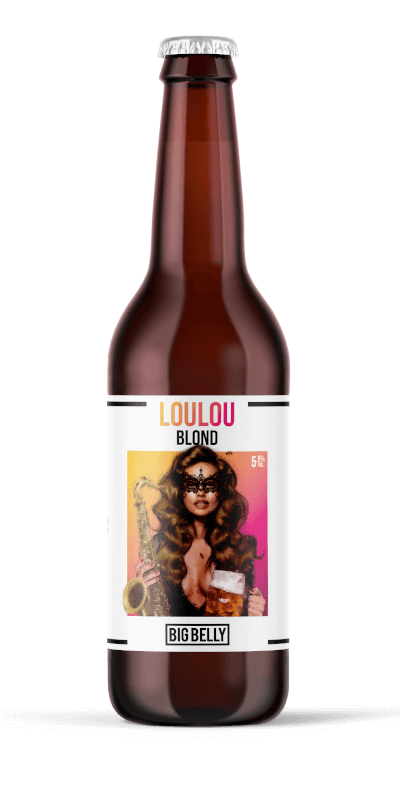 €26,00
LouLou
LouLou is an easy blond, inspired by the flavors of New Orleans a.k.a. “The Big Easy”. Calista hops give this beer an amazing white peach & apricot aroma and the honey infusion gives it a touch of lovely sweetness. 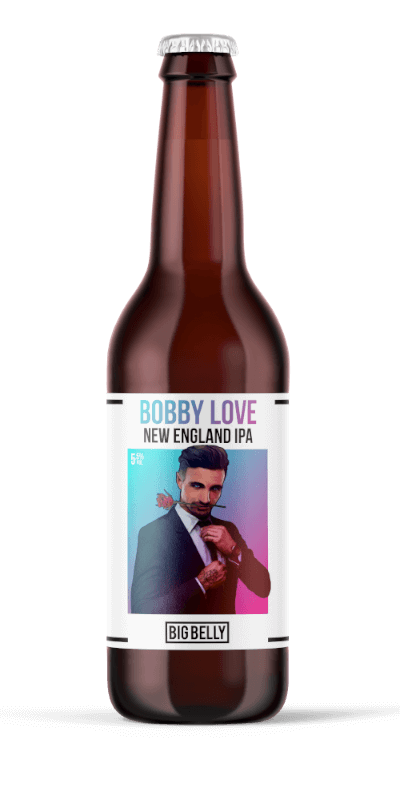 €28,75
Bobby Love
Bobby Love is a fresh & fruity beer full of hops that give it juicy tropical fruit flavors, like pineapple, mango & some distinct coconut aroma. 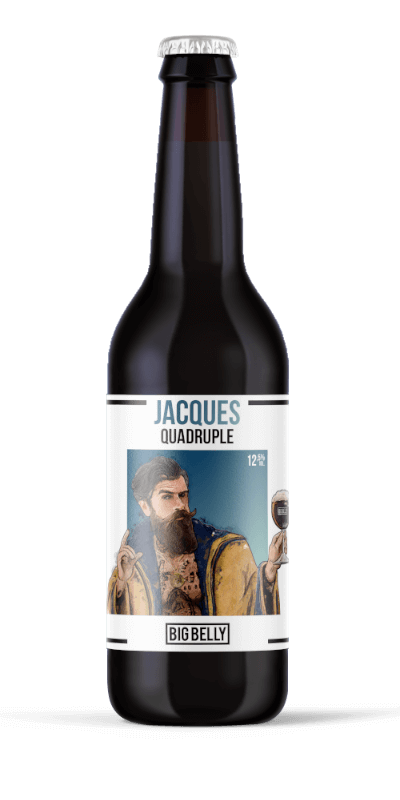 €33,75
Jacques
Jacques is a boozy bad boy full of complex aroma's like figs, plums, caramel and dark sugar syrup. The rich and long aftertaste is both spicy as it is velvety smooth. A new classic, with some Big Belly awesomeness. 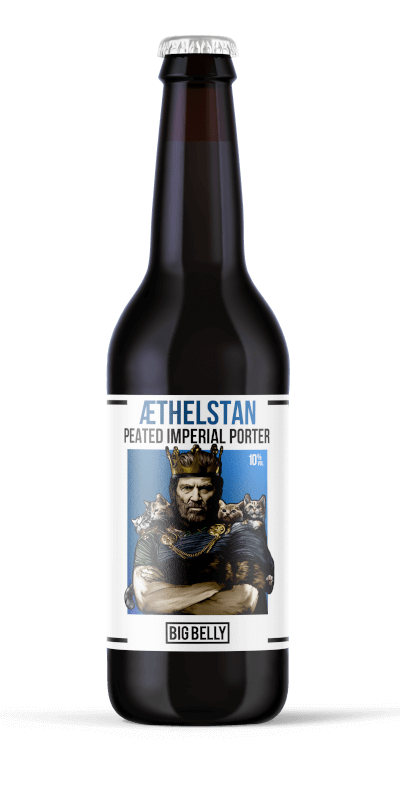 €35,95
Æthelstan
Æthelstan is a big, bold and complex porter. Among the 10 different malts used, we added some peated whiskey malt to give the beer its complex smokey whiskey flavor that is especially noticeable when it warms up.

We use cookies on our website to give you the most relevant experience by remembering your preferences and repeat visits. By clicking “Accept”, you consent to the use of ALL the cookies.
Cookie settingsACCEPT
Manage consent

This website uses cookies to improve your experience while you navigate through the website. Out of these, the cookies that are categorized as necessary are stored on your browser as they are essential for the working of basic functionalities of the website. We also use third-party cookies that help us analyze and understand how you use this website. These cookies will be stored in your browser only with your consent. You also have the option to opt-out of these cookies. But opting out of some of these cookies may affect your browsing experience.
Necessary Always Enabled
Necessary cookies are absolutely essential for the website to function properly. These cookies ensure basic functionalities and security features of the website, anonymously.
Functional
Functional cookies help to perform certain functionalities like sharing the content of the website on social media platforms, collect feedbacks, and other third-party features.
Performance
Performance cookies are used to understand and analyze the key performance indexes of the website which helps in delivering a better user experience for the visitors.
Analytics
Analytical cookies are used to understand how visitors interact with the website. These cookies help provide information on metrics the number of visitors, bounce rate, traffic source, etc.
Advertisement
Advertisement cookies are used to provide visitors with relevant ads and marketing campaigns. These cookies track visitors across websites and collect information to provide customized ads.
Others
Other uncategorized cookies are those that are being analyzed and have not been classified into a category as yet.
SAVE & ACCEPT